The Cadastre Working Group (CWG, formerly Permanent Committee on Cadastre) has put together a glossary of terms around all things Cadastre to establish consistency in communications and documentation from ICSM. If you have any feedback or additional terms you think should be added to the glossary, contact the CWG Chair, Bradley Slape at Bradley.Slape@sa.gov.au

Cadastre 2034: Powering Land and Real Property is a national strategy for Cadastral Reform and Innovation for Australia. It has been prepared by the Permanent Committee on Cadastre; a Subcommittee of ICSM.

The strategy captures the trends and articulates the vision of what we believe the community will require of our cadastral system by 2034. It identifies where current information falls short of today’s consumer expectations, and considers the user scenarios that could trigger changing needs in the future. Cadastre 2034 has been developed with input from a New Zealand perspective and Trans–Tasman collaboration remains an important feature of this strategy.

The vision for Cadastre 2034 is for a cadastral system that enables people to readily and confidently identify the location and extent of all rights, restrictions and responsibilities related to land and real property.
In future, citizens will know what can be done on land (rights), what cannot be done (restrictions) and what must be done (responsibilities).

Our mission is to promote and support innovation and provide the leadership, coordination and standards necessary to deliver a unified cadastral system that can be leveraged to find sustainable solutions to meet emerging needs and opportunities.

The cadastral boundary system can be represented using a triangular model based on the following descriptions:

A Spatial Cadastre is defined as the official jurisdictional spatial representation of cadastral parcels and their boundary points and lines. 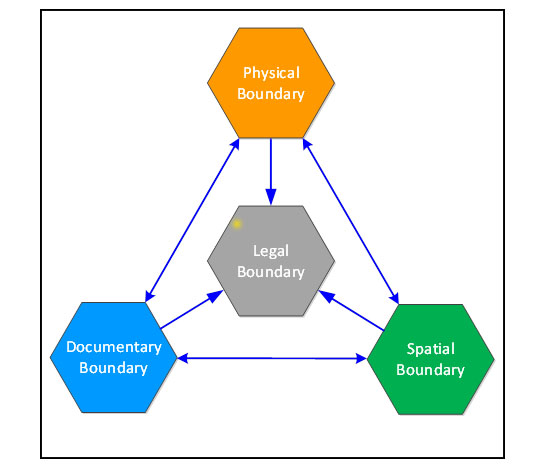 ICSM established a Permanent Committee on Cadastral Reform (PCCR) in 1999.  This was created to provide leadership in advising ICSM on cadastral reform matters, raise awareness of the cadastre and the benefits of cadastral reform to industry and the community.  Its role is to develop a coordinated approach to cadastral reform that incorporates the participation of all stakeholders, including other peak government and industry groups.

In 2004 ICSM became a Standing Committee of ANZLIC - the Spatial Information Council.  In 2005 as part of its strategic review and planning process, ANZLIC disbanded its Spatial Data Infrastructure Standing Committee (SDI SC) and divested much of its responsibilities to ICSM - in particular to the PCC.

In 2009 and 2010 New Zealand and each Australian State and Territory completed two separate and comprehensive spreadsheets of questions related to the administration of their cadastral systems. The results of these surveys have been compiled into a single document titled "Australian and New Zealand Cadastral Systems - Questions and Answers" as a PDF document or the Word version.