The content of these two is very similar, but as their titles suggest, they supply different levels of information.  As Datums is a ‘jargon rich’ discipline it is recommended that you first read Datums - The Basics first.

Most experienced Geographic Information Systems (GIS) professionals have come across errors resulting from confusion or lack of understanding about geodetic datums.

In Australia, mapping mismatches of 200 metres are common and result from confusion created by:

In order to understand what is happening and what it all means, a basic understanding of datum is required.

But first a warning - please read the section which explains the difference between Ellipsoids and Spheroids.

Unfortunately the Earth is not flat.  Even a cube would have been easier for map makers.  However it isn’t a cube either.  A sphere would have been a poor third choice but even that isn’t the case.  The closest basic mathematical figure that approximates the shape of the Earth is the Ellipsoid ⁄ Spheroid.  The Ellipsoid ⁄ Spheroid is a slightly ‘squashed’ sphere shown diagrammatically below:

A Ellipsoid ⁄ Spheroid has: 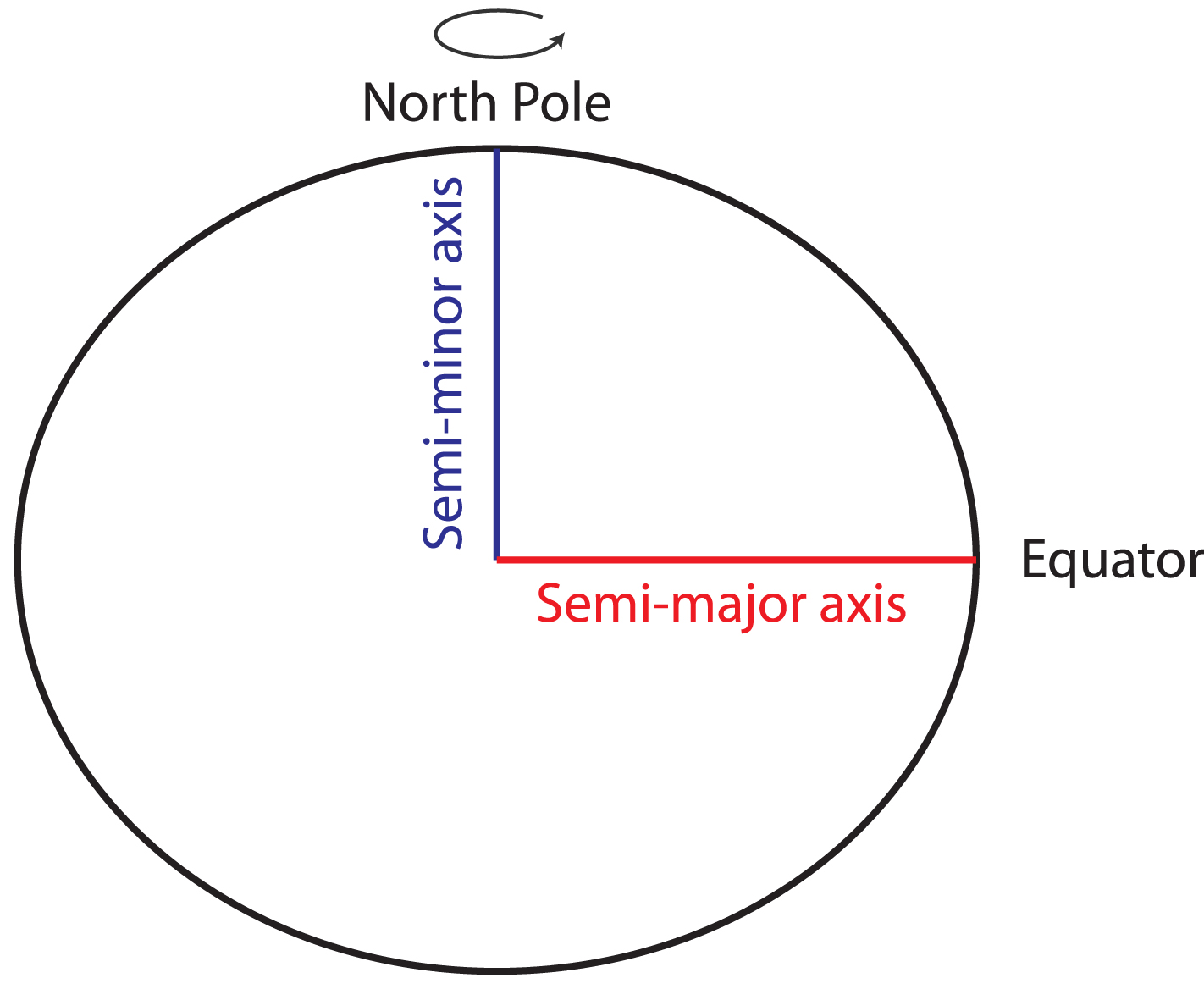 a semi-major axis (a)

a semi-minor axis (b)

A Ellipsoid ⁄ Spheroid is usually described by the semi-major axis and a flattening component (f).
semi-minor axis = semi-major axis x (1 - flattening)
Because flattening is a small number and usually quoted to numerous decimal places, it is sometime given as 1 ⁄ f.

There are now two Ellipsoids ⁄ Spheroids most commonly used to describe the shape of the Earth:

Fitting an Ellipsoid ⁄ Spheroid to the Earth 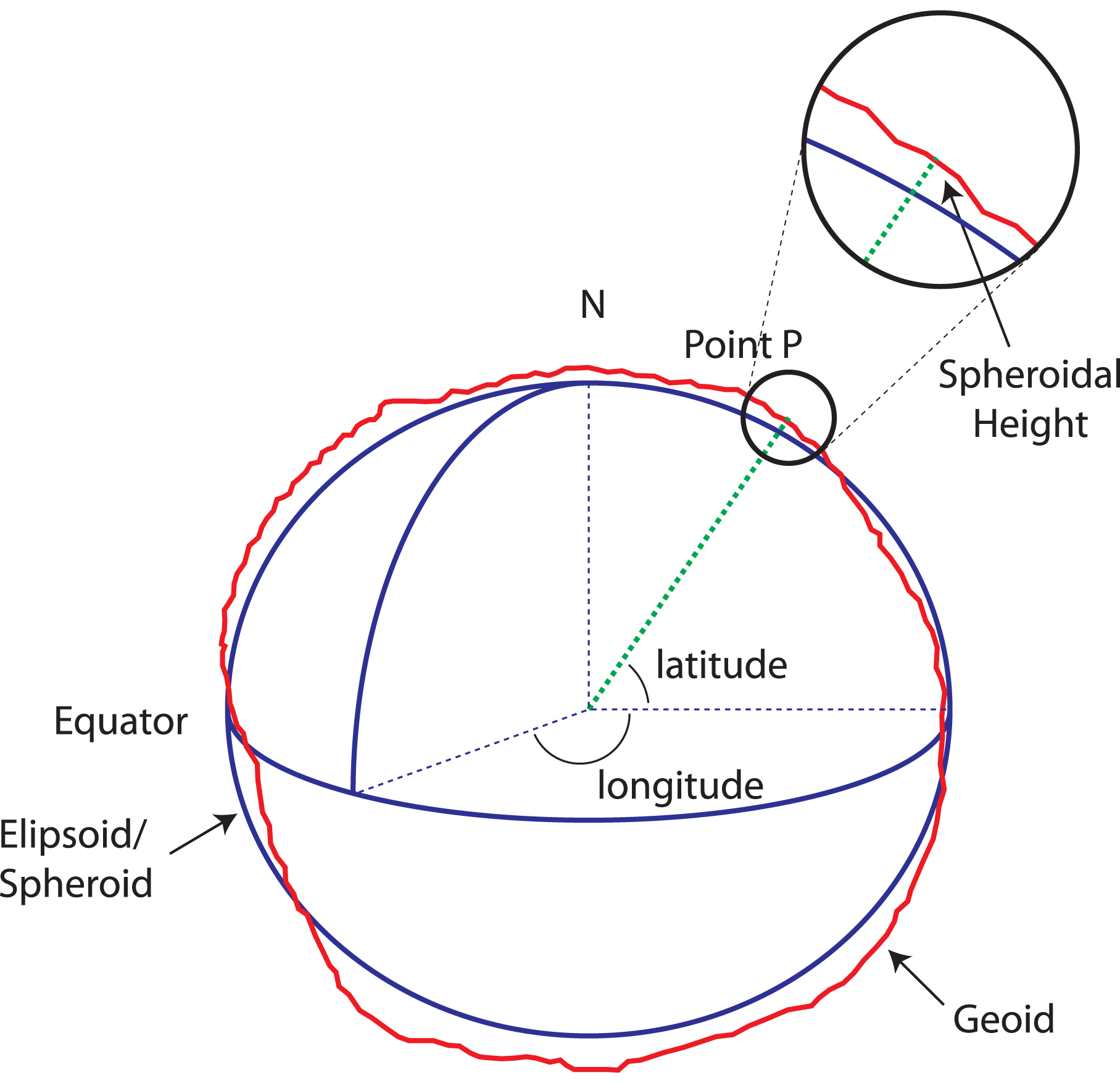 In Geodetic terms every point on the surface of the Earth’s Geoid is defined by 3 values.

The most common method Geodesists use involves measuring the distance from the centre of the Earth to the point on the surface of the Ellipsoid ⁄ Spheroid.  This is called an Earth-centred Cartesian Coordinate System.  Three values are recorded (x, y and z), and there are no angles - only distance.

Another way is to use latitude, longitude and ellipsoidal ⁄ spheroidal height (the height above or below the datum’s ellipsoid ⁄ spheroid surface).  The first two are angles and the third is a distance.

It is important to note that if a point is identified using either system it is possible to rigorously (exactly) convert one to the other - provided they use the same datum.

See the section below for an explanation of how the ellipsoidal ⁄ spheroidal height and elevation.

To define a global coordinate system it is necessary to work out where the North and South Poles are and where the centre of the Earth is.  This is done by very accurately determining the position of a number of locations (called stations) around the Earth.  To do this, geodesists use a variety of methods such as:
» GPS
» Satellite Laser Ranging (using lasers to measure the distance to a satellite from various stations on the Earth’s surface)
» simultaneous measuring the (times) of signals from very distant astronomical objects such as quasars (this is called very long range Interferometry).

All this information goes into a mathematical adjustment and the end result is x, y, and z geocentric coordinates for each station.  In other words, by accurately measuring the difference in position between these points, and their relationship with celestial objects, it is possible to work out positions relative to the centre of the Earth and the location of the axis of rotation (position of the North and South Poles; and the Equator).

In this way, we now have a ’reference frame’ made up of accurately positioned points around the Earth’s surface.  By fitting a Ellipsoid ⁄ Spheroid into this frame we can turn our x, y, and z geocentric coordinates into latitude, longitude and height above the Ellipsoid ⁄ Spheroid.

The main difference between ITRF and WGS84 reference frameworks is the choice of fixed stations used in their adjustments.  Not surprisingly, the difference between WGS84 and ITRF 2000 is now very small, generally less than 10 millimetres.

Tectonic plate movement, or continental drift as it was commonly referred to, adds another level of complexity to understanding datum.  This is because, regardless of the Ellipsoid ⁄ Spheroid or reference frame, the various landmasses are moving in relation to each other and in relation to the reference frame.

It is perhaps useful to think of a Ellipsoid ⁄ Spheroid and reference frame as establishing a grid over the Earth.  Continents move under this grid and therefore the coordinates of any point will change over time, relative to the grid.  Australia for instance, moves towards the north-east at approximately 7 centimetres per year.

For accurate work, it is therefore necessary to define a reference time (date) or epoch for positions established using the Ellipsoid ⁄ Spheroid and reference frame. Sometimes the velocities (speed and direction of movement) of control points are also quoted. For example, assume the corner of a mining lease in Australia was defined using WGS84 coordinates. If the date of the survey is not known and could be anytime over the past 10 years, there is an uncertainty in the location of the corner of 7cm per year or up to 0.7 of a metre over 10 years.

Geocentric Datum of Australia
We can now define a geodetic datum as being composed of an Ellipsoid ⁄ Spheroid, reference frame, and reference time or epoch.  For example, the Australian national geodetic datum is the Geocentric Datum of Australia 2020 (GDA2020).  GDA2020 is based on a realisation of the ITRF2014 at epoch 2020.0, or 1 January 2020. This means the coordinates in Australia are projected forward to the date of 1 January 2020.

These refinements to the reference frame and many of the local scale distortions had not been reflected in changes to the Australian datum since GDA94.

GDA2020 provides a more robust and accurate datum which is more closely aligned to global positioning systems like GNSS and will ensure that Australian industry, the research community and the public can accurately align themselves and their data.

Australian Geodetic Datum
Before GDA94, Australia used the Australian Geodetic Datum (AGD).  The original version of this was computed in 1966 (AGD66) with a re-adjustment made in 1984 (AGD84).  This re-adjustment was not adopted by all States resulting in both versions being in use prior to adoption of GDA94.  Users need to be very careful, as there remains a lot of data and information based on the old system and there is approximately 200 metres between the two.

The AGD datum was designed to fit the shape of the Earth in the Australian region as closely as possible.  For this reason the Ellipsoid ⁄ Spheroid, (a = 6378160, 1 ⁄ f = 298.25) was fitted to local geodetic control points and did not have its centre at the centre of the Earth.  Further, it was fixed in relation to one central point, Johnston Origin, and therefore was not affected by tectonic plate movement; the datum went with the plate.  The major drawback of this datum was that it could not be rigorously related to international systems such as GPS.

WGS84
The International Hydrographic Office and many international navigation systems quote the datum they use as simply WGS 84.  As we have pointed out, this is, strictly speaking, insufficient for a datum.  The version of WGS84 is commonly not quoted nor is any reference epoch.  For the purposes of charting and navigation however these considerations are generally insignificant.

ITRF 2000 at 2000.0
Because some of Australia’s external territories, such as Heard Island and the Australian Antarctic Territory, move independently of the Australian mainland, these areas use a slightly different datum.  The internationally accepted datum for Antarctica is ITFR 2000 at epoch 1 January 2000 (ITRF 2000 @ 2000.0) using the GRS 80 Ellipsoid ⁄ Spheroid.

Projections and datum should not be confused.  See the explanation about how these differ in Datums - The Basics.

If you have understood all of the above, your troubles aren’t quite over.  Heights of points on the Earth’s surface should also be understood.  Heights are expressed in relation to a height datum.  The current height datum for Australia is the Australian Height Datum (AHD).

The Geoid
To understand height datum it is preferable to first understand the concept of the geoid.  The Geoid is an imaginary surface which coincides closely with mean sea-level over the ocean and its extension under the continents.  Because gravity is variable, depending upon things such as variable Earth mass, the geoid is an irregular surface.

Surveyors traditionally transferred heights between benchmarks using levelling equipment based on gravity.  (Benchmarks are stable marks placed on the ground which have known heights above sea level - they are sometimes called vertical control points.)  Therefore heights that are given in relation to the national height datum are heights above the Geoid (or very close to this).

This map is an example of how this principle can be applied.  This shows the AUSGeoid Model and the contours show the Geoid - Ellipsoid ⁄ Spheroid separation (N value) relative to the GRS80 Ellipsoid/Spheroid 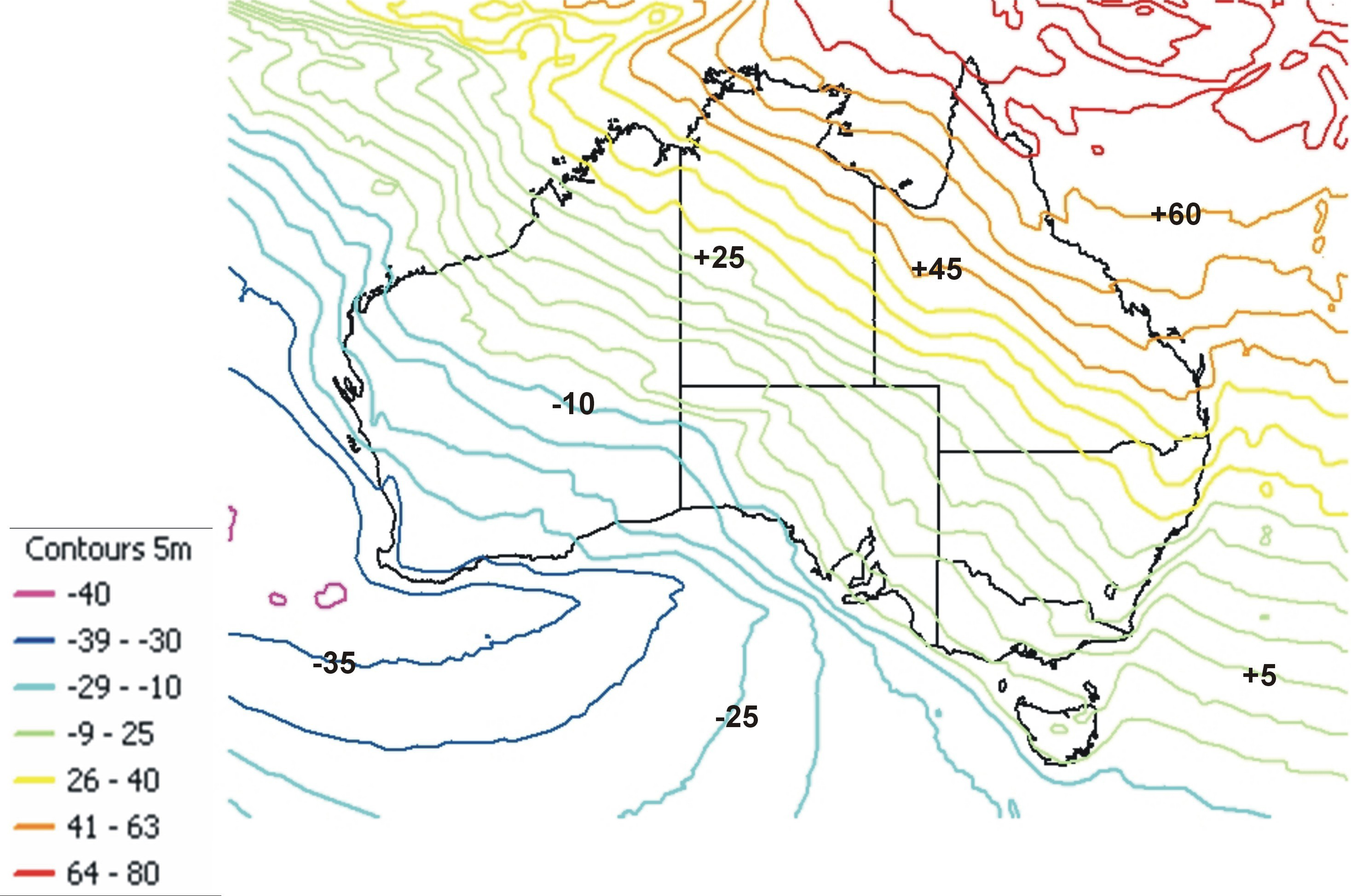 Although the levelling measurements used to establish the AHD are accurate, the AHD contains some small errors, and is known to differ from the geoid.

Spheroidal Heights
Global positioning, such as GPS, will generally give a latitude, longitude (or x and y position) and height.  This height is usually the height above (or below) the Spheroid (Ellipsoid).

Relating AHD and Spheroidal Heights
Improved models of Australia’s Geoid have produced values for the separation between the Geoid and the Ellipsoid ⁄ Spheroid.  This value is usually known as N and when using this value it must be remembered that the Geoid is only an approximation of AHD.

Bathymetric Heights
Bathymetric heights, for example, the water depths shown on hydrographic charts, are usually based upon Lowest Astronomical Tide (LAT).  This makes sense as mariners need to know the least possible depth.  However the difference between Mean Sea Level and LAT varies around Australia and also within local areas.  The consequence of this is that the relationship between AHD and LAT varies and so bathymetric data is not easily related to land based AHD heights.

→   Read more about heights in Surveying for Mapping.