Navigation Charts combine aspects of topographic, general reference and thematic maps and are produced as navigation aids for ships, boats and aircraft.  Specialist knowledge is usually required to read charts.

Also, navigation charts typically have well defined standards which are strictly adhered to.

Explaining Some Jargon – The Difference Between Maps and Charts

When people started making maps 5,000 years ago a distinction gradually emerged regarding maps of land and maps of the sea/ocean.

For the land they were called maps and for the sea/ocean they were called charts. Both would map the coastline and its features. However the chart was more likely to show great detail about the water and the water's edge, with little information about the land – the exact opposite of a map. In particular, features which could be dangerous to ships (e.g. submerged rocks) were shown in as great a detail as knowledge and the scale (size) of the chart would allow. Also, land features which would be an aid to navigation (e.g. cliffs ⁄ headlands or lighthouses) would be shown, while features which are important to maps (e.g. main roads or inland towns) would not be shown.

Another difference was that charts had specialist information which aided navigation, especially navigation out–of–sight of land. This information included such things as water depth, location of lighthouses, significant coastal features (e.g. a mountain or a headland), compass roses and text notes (examples of text notes are ‘area usually covered in fog’, ‘strong tides occur in spring’ etc).

In the twentieth century, with the arrival of flight, a convention developed that maps which were specifically made to aid aeroplane navigation would also be called charts. A key factor in this was that they also needed specialist information to aid navigation.

The chart images used here are with the permission of the Australian Hydrographic Service; for more information regarding Australian marine navigation charts please visit their website www.hydro.gov.au.

Marine navigation charts (also referred to as nautical charts) are produced at a vast variety of scales – depending on the information available and the nature of the area being mapped. 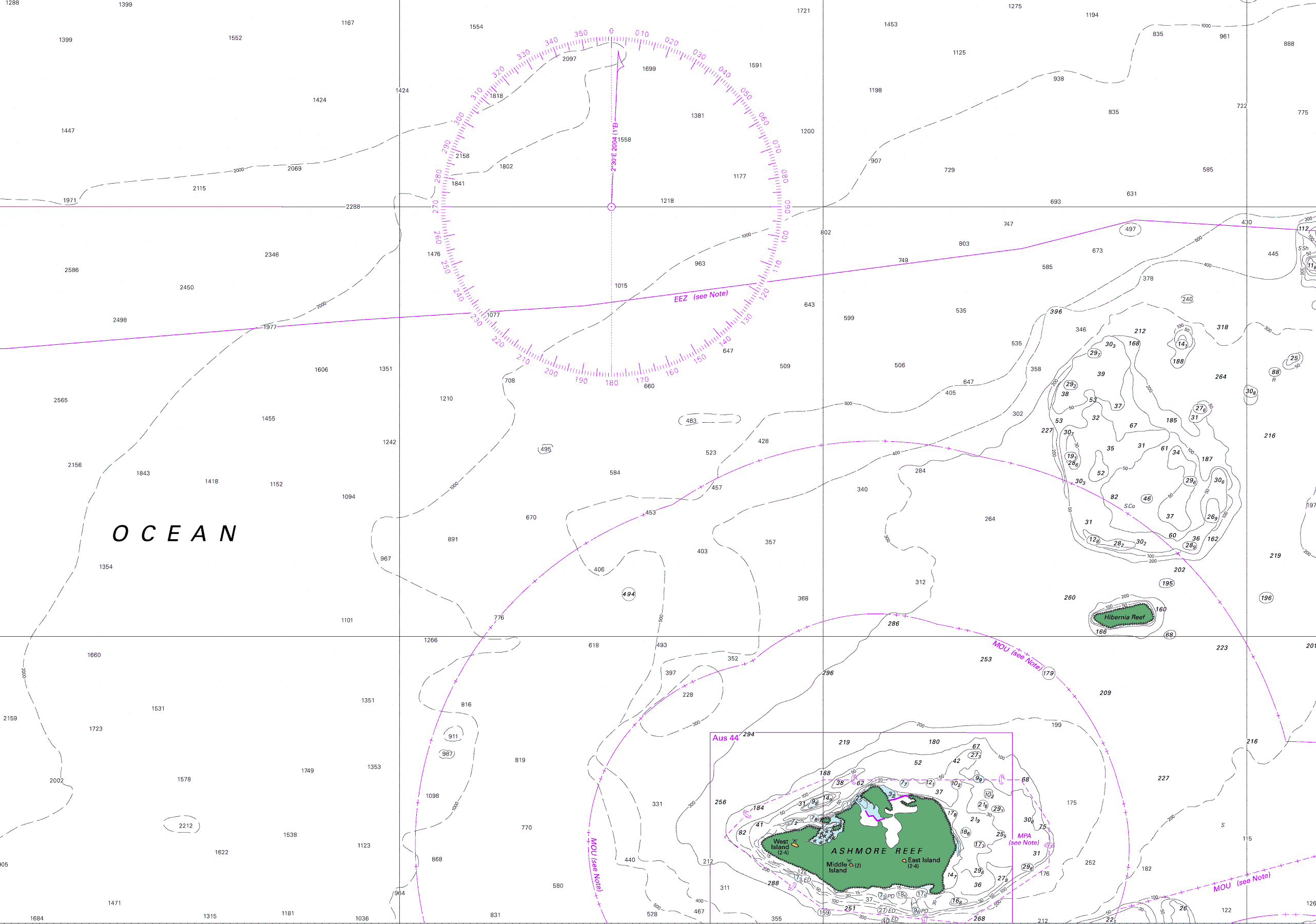 These are extracts from Australian charts which cover part of the Indian Ocean and include Ashmore Reef.

The first extract is an example of the level of information that charts show over great expanses of ocean. This includes information about the seabed depth below the surface of the water. The numbers indicate known depth for an individual spot and the dotted line is an indication of lines of equal depth — generally called bathymetric contours (or isobaths) to distinguish them from land contours. The purple circle is a compass rose.

The second extract is the same as that shown in the first extract – it is shown here in a larger format for ease of reading.  See the section about maps being reproduced at different scales in the Marginalia Section. Note that the level of information supplied about depth is far greater than on the first image; this is because small changes in depth in shallow water can be a hazard to shipping, whereas in deeper water it is not as critical.

The days of ‘black–and–white’ charts (old ‘fathom’ charts) are over. The International Hydrographic Organisation (IHO) international specifications recommend that nautical charts have a minimum of four colours (blue, black, grey and magenta).

Like the marine navigation charts, air navigation charts are produced at a vast variety of scales – depending on the information available and the nature of the area being mapped. However, a fundamental difference between the two is the functionality – to state the obvious: 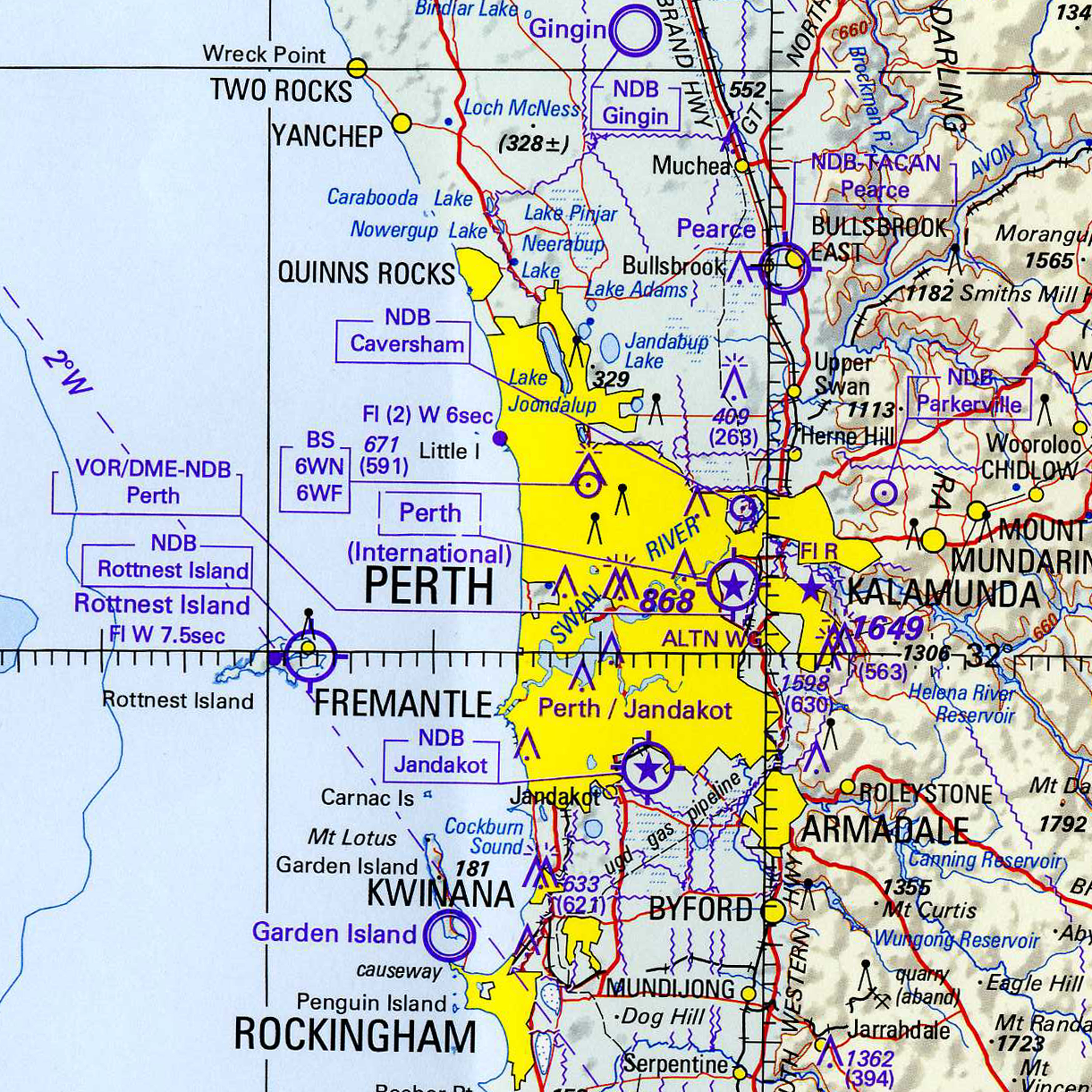 These two examples of air navigation charts are from a World Aeronautical Chart 1:1 million scale charts and are designed for use by aircraft flying long distances.

With this in mind, the main landscape features which are shown on the map are those which could be easily seen from a high flying aircraft. Cities and towns are also shown; as are places which have landing grounds (the round purple symbols).

An indication of the ruggedness of the land is given by hill shading and height values for individual high points in an area (the large black numbers). Also, man-made features which could be a hazard to low flying aircraft are also shown – examples on these charts are the purple wiggly lines (power lines) and the purple triangles (towers and chimneys).